The following is the post I wrote for Westtown School’s Senior Projects Blog:

The first steps on the Camino are toward obtaining the pilgrim’s passport, a document that is stamped along the way to show that you have actually walked to the cathedral in Santiago and not, say,  taken a taxi. Was it a sign that the first church we came upon in Sarria was closed? We’ll see. We wandered through the streets and came upon a convent that answered our ringing of the bell. We purchased our pasaportes de peregrinos and the caretaker carefully impressed the stamp that signified the beginning of our journey.

Our start was a slow one. The students stopped to admire the beautiful vistas and buildings in Sarria, organizing themselves for group photos. In spite of the late start, our packs felt light and spirits were very high.  We were ready for this. Vamos!

The trail quickly ascended and the rigors of the Camino began to reveal themselves almost immediately. The air became misty. The crisp morning temperatures became more frigid. The physical abilities of each person of also made themselves known. After about an hour, we were not walking as a group, but in small groups with those whose paced matched our own. The Camino is, in one way, how we imagined it would be: surrounded by verdant fields, hugged by medieval villages, traversing lovely forests. It’s also something completely different than any of us could have imagined.

The Camino is peppered with farmhouses and ‘towns’ that consist of sometimes only three or four buildings. We came upon one such village and there was a tiny church that was built about 500 years ago. We entered the church where a priest was positioned in a chair at at the entrance; it was strange how he seemed to be awaiting our arrival, stamp in hand.  He pressed the stamp to each of our passports and as we said ‘gracias, padre’ he bid us ‘buen Camino’ the salutation of those on the path. We decided to sit a moment in the pews of this ancient edifice built for pilgrims. As we sat in silence, the priest said that he would like to make a special prayer for us. He ascended the altar and said a blessing for pilgrims in general and for us specifically. After the blessing we continued in silent worship for a short time. I wondered what the students were reflecting upon in those moments; assuredly some thoughts were pleas for the rain to subside and for a restaurant to emerge from behind a rainbow- I’ll admit to a rain-ceasing-food-providing prayer myself. But I know it was much more than that: a powerful moment for all of us to consider the millions of footprints made before us on this journey, to consider what it means to make this kind of pilgrimage, to consider ourselves and our lives.

We resumed walking and the rain came harder. It got colder. We got hungrier. Much of the trail was still uphill. In these hours we got our first glimpses of our ‘real’ selves,  the ones that emerge in times of strain and discomfort.  As a whole, the group remained positive until the hunger kicked in. We passed several places to eat, but all were closed. As we were beginning to wonder if the snack bars in our packs would be our lunch, we came upon a small old tavern on the trail, so small that our group of 14 filled the space.  We huddled together and ate as though we hadn’t eaten for days, instead of hours.  The simple, hearty country food filled our bellies and the opportunity to sit down together warmed our hearts. As the meal came to a close, the sun made an appearance and gave us hope that we could make it the next 10km.

The sun mostly accompanied us the rest of the day and we were able to enjoy those verdant fields and the incredible vistas over the rolling hills of Galicia.  Later we arrived in Portomarrin via a stone stairway blistered, sore, and exhausted, but so proud that we had 25 km under our belts. We were greeted with ‘the wave’ in the town plaza by a group of Spaniards from North Africa  – a group we did not know at the moment would become our constant companions on the Camino. It was a hard day, but it was a very good one. 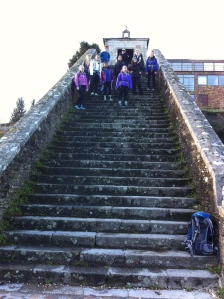 I write. I connect. I travel. I make bad puns.
View all posts by lynettea1 →
This entry was posted in Uncategorized and tagged camino de santiago. Bookmark the permalink.